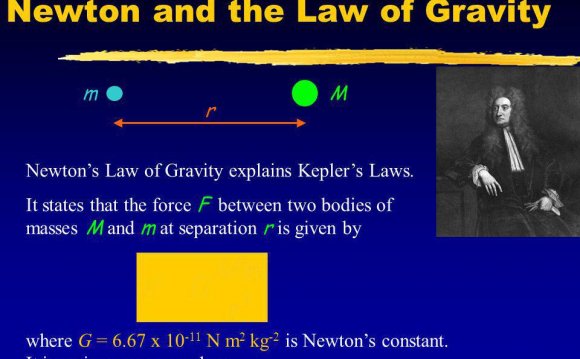 Newton's Three Laws of Motion and his Law of Gravity are probably the most famous of all physics. They govern the motion of objects that we see in our everyday lives.

Newton's First Law of Motion says that an object will remain in its state of motion unless acted upon by force. Essentially, this means that if an object is not moving, it will remain still until a force (a push or pull) acts on it. Likewise, if an object is moving, it will continue to move in the same direction with the same speed in a straight line until a force acts on it. In either case the motion is changed.

Newton's Second Law of Motion says that force is equal to the mass of the object times its acceleration. Remember, a force is a push or pull, and mass just means how much of the object you have. Acceleration is how fast the velocity (speed with direction) is changing. The Second Law essentially says that forces are necessary to accelerate objects with mass, and it defines how big that force is for the particular object.

Newton's Third Law of Motion says that for every force acting on an object by another object there is a force that acts upon the first object by the second one. This second force is equal to the first and is in the opposite direction. Whenever you have forces between two objects of about the same size, you can see this. When a pool ball hits another one, you can see that both change their velocities. The changes in their velocities are in opposite directions. That's because the forces on them point opposite ways. If you and a friend are on ice and one of you gives the other a shove, you will move opposite directions. it doesn't matter who decided to shove- the forces on the two of you were equal and opposite. Of course when one of the objects is the Earth, it's hard to notice the force on it, because its mass is so big it won't accelerate much if you give it a shove.

Indians Knew the Laws of Gravity 500 Years Before Newton