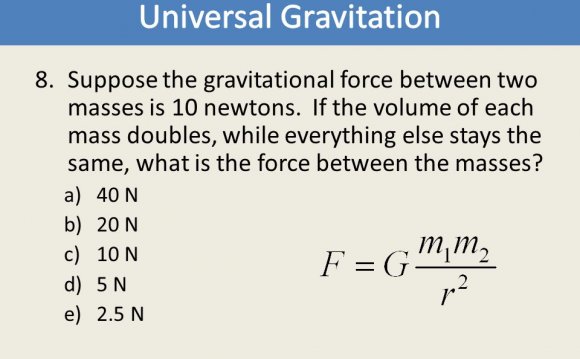 In order to calculate the gravitational force between two objects with masses of m1 and m2, the equation is:

where G is the gravitational constant (6.67E-11 m3 s-2 kg-1), r is the distance between the two objects, and F is the magnitude of the force between the objects.

So let's try to solve this problem: Suppose I own two planets. I would like to send resources between my planets, but I need to know the force generated between them in order to correctly launch my freight shuttles. One of my planets weighs 6.0E24 kg (the mass of the Earth) while the other weighs 4.9E24 kg (the mass of Venus). The distance between the planets is 4.1E10 m (the distance between Earth and Venus).

Follow the links below to find out more about calculating gravity.

The force of attraction (or repulsion) of two particles can be calculated using Coulomb’s law. The law states:

To put this equation to work, consider the following problem. What is the electric force between 2 up quarks separated by 1.0E-16 meters? This is a typical separation inside a proton. Given: The charge of an up quark is (2/3)e.

Follow the links to find out more about calculating the electromagnetic force.

The strong force is, by far, the most difficult force to calculate. The calculation of the strong force using QCD (quantum chromodynamics) started in the 1950’s when scientists first began to notice that there were far more fundamental particles than the proton, neutron, and electron. Scientists found that there were far smaller particles that formed protons and neutrons. They called these particles “quarks.” (WHY QUARKS?) Scientists first believed that all quarks were the same. Through further experimentation and calculation, this was proven to be false by the Pauli Exclusion Prinicple. Throughout the 1970’s, physicists were bogged down by the extreme amount of math involved in determining the force between two quarks.

Murray Gell-Mann found that quarks contained a property separate from charge. This property was called “color.” This color charge was found when Gell-Mann tried to explain the existence of a particle containing three up quarks (according to the Pauli exclusion principle this is impossible). More about the history of QCD will be explained later. For now, let us look at the equations associated with QCD. Press "play" in the animation below to find out more about the equations associated with the strong force. Then follow the links below to read more about the strong force.

What Happens to the Gravitational Force Between 2 Planets ...

How do you calculate the gravitational force between two masses?