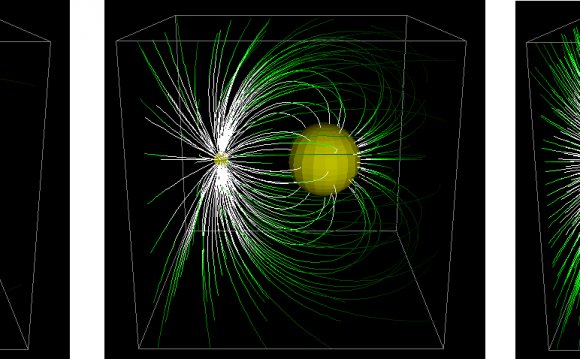 This episode introduces the notion of a "field of force" and how we can diagrammatically represent such a field using field lines. The actual strength of the field at a point in space is defined by the field strength.

Discussion: Fields and field lines
When you pick up an object such as a pen, there is direct contact between you and the pen. This direct contact exerts a force on the pen, causing it to move in the way that it does. However, the pen also has a weight due to its presence in the Earth’s gravitational field. How is this force exerted, even when there is no direct contact between the Earth and the pen? A force is exerted on the pen from the Earth because the pen is in the Earth’s gravitational field. We can define the field due to a body as the region of space surrounding it where other bodies will feel a force due to it.

Thus for a spherical mass, like the Earth, we would have the following diagram:

The field lines are directed radially inwards, because at any point in the Earth’s field, a body will feel a force directed toward the centre of the Earth. The field lines become more spread out as the distance from the Earth increases, indicating the diminishing strength of the field. Note that the field is really 3-dimensional, but of course on paper, we can only take a 2-dimensional slice of it. This is a radial or spherical field.

Close to the surface of the Earth, the field lines look like:

They are directed downwards (the direction in which a body near the Earth’s surface would feel a gravitational force), and they are parallel and equidistant indicating that the field is constant, or uniform.

A couple of important points to note:

(The concepts of field and field lines will be used again when we look at electric fields and magnetic fields).

where W = weight in newtons. Thus g has units N/kg.

We can use this definition to get an equation for using Newton’s law of universal gravitation. The attractive force of a mass M (causing the field) on a mass m a distance r away is simply GMm/r2. Thus the attractive force per kg of mass of the object (mass m) is (GMm/r2)/m.

This gives an expression for the field strength at a point distance r from a (point or spherical) mass M.

A couple of points to note:

What is a gravitational field?